Surprise! Here's How Moms Decide If Their Partner Will Be a Good Parent

Just how much of a parenting role you allow your partner to play hinges on the health of your pre-baby relationship, according to a new study.

It's no secret that a baby wreaks havoc on your relationship. Those early days with a newborn are often a dizzying stretch of exhaustion, mood swings, and feeling totally overwhelmed. And then there's the shift that happens when two become three: The main caregiver (usually us moms) becomes the boss of baby care duties, doling out tasks to their partner.

But just how much of a parenting role you allow your partner to play hinges on the health of your pre-baby relationship, according to a new study. Researchers discovered that moms who clamp down on their partner's involvement with the baby tend to feel like their relationship is already on shaky ground. Plus, the partner is also less confident in his own ability to raise the child. Moms who are perfectionists, anxious, or depressed are also likely to limit their partner's child-care involvement.

On the flip side, women who believe moms are naturally better at taking care of babies aren't more likely to shut out dad—a surprise finding that requires further investigation, scientists say. Also, moms who said religion was important to them also tend to include their partner in child-rearing.

To reach these conclusions, scientists analyzed data from the New Parents Project, a long-term study involving 182 first-time moms and dads. The findings are published in the most recent edition of Parenting: Science and Practice.

"New mothers are looking at their partner and thinking, 'Is he going to be here for the long haul? Does he know what he is doing with children?'" Sarah Schoppe-Sullivan, co-author of the study and professor of human sciences at The Ohio State University, said in a press release. "This assessment by mothers is really what is most critical in gatekeeping among the couples we studied."

"Gatekeeping" is another way of saying how much or how little we moms encourage our partners to get involved. Moms who want to promote and facilitate a father-child relationship will "open the gate" by asking their partner for his opinion on a parenting issue (like sleep training or starting solids) and coming up with ways for him to bond with baby (like bottle feeding, tummy time, or skin-to-skin). Moms who aren't so sure about their partners as parents will "close the gate" by picking apart the father's parenting skills, making all the decisions involving baby and redoing any baby-related tasks the dad did (like re-fitting the diaper or cleaning the bottles).

But don't feel bad if you're guilty of an occasional "gate closing" behavior—gatekeeping is a two-way street, Schoppe-Sullivan says. "Part of this is mothers judging fathers," she explains. "But if the mother has bad feelings about the father's ability or desire to take care of the child, it may be accurate. It may make sense to put up some barriers."

She adds that it also helps if you have realistic expectations of your partner and remember to make the distinction between decisions that are dangerous (like exposing baby to choking hazards) and ones that are a matter of choice (like your go-to baby hold).

I know, I know—easier said than done, especially in the throes of those first weeks with baby, when you're both still figuring out your roles. Personally, I've been guilty of refitting a diaper and changing an outfit my husband picked out for our son. But if this study serves any purpose, it's that including your partner in child care is just as important as listening to your gut and pulling back. Now it's your turn: How do you get your partner involved with taking care of baby? 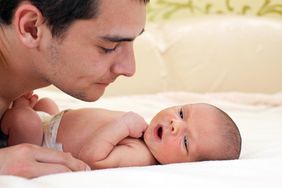 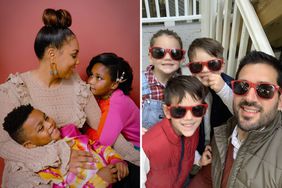