One Mom's Battle to Bring Breast Milk on a Flight

"Thanks so much to your staff for their complete lack of compassion for a tired mom who really just wants to get home to her babies," the frustrated mama wrote.

Vanessa Urango, a Texas mom of two, did everything right before heading to the airport to travel home with two weeks worth of breast milk in tow.

She called Delta first to find out exactly what she'd need to do to bring the breast milk along. "One week before my scheduled departure, I contacted customer service to find out how to transport the frozen breast milk home to my infant," Urango wrote on Facebook. "I was told to pack it with dry ice in a cooler and check it at baggage claim. The dry ice content had to be under 5.5 lbs and the outside of the container had to be labeled. Because of this, I made a special trip to a local Target ($25 round trip Uber ride) to purchase a cooler and packing tape/markers to label the cooler. On the day of my departure I woke up at 5:30 am to go to a dry ice vendor ($35 round trip Uber). I packed it all up and waited until I arrived at the airport to tape it up and label it, just in case it needed to be opened and to verify how it should be labeled."

People Are Furious About This Mom's Breastfeeding Photo with Santa

When Urango arrived at the airport, however, she received a different story altogether. "They said basically, you can't take this cooler on the plane," Urango told Today. "Out of three agents, no one could tell me what to do."

Apparently, it wasn't the breast milk that was the problem at the airport, it was the dry ice. Urango said the agents "just left me standing helpless with a cooler full of frozen breast milk and dry ice. Luckily, some very kind and compassionate airport police officers came to my rescue. I cried to them out of complete exhaustion, frustration, and anger, and they helped me figure out a solution which involved tossing the dry ice into a bathroom trash can and taking the cooler with only frozen breast milk as a carry on."

Because she had to toss the dry ice, Urango worried that the milk would spoil during the flight. "Who knows if it will even still be frozen when I arrive home in 8 hours," Urango wrote at the time, "which basically means two weeks worth of breast milk will have to be thrown away. I wasted so much time and money for nothing."

According to the Transportation Security Administration, breast milk, baby formula, and baby food and juices do not fall under the "3-1-1" liquid guidelines that limit fluids to three ounces, which means those items can be carried onto planes.

Delta told NBC in a statement it has apologized to Urango and offered to reimburse her for the costs of preparing her breast milk.

"A Delta rep contacted me via phone and acknowledged that employees should have been aware of Delta's dry ice policy and acted incorrectly," Urango wrote on Facebook. "They are sending me $150...better than nothing but still a long way to go toward making traveling a pleasant, hassle free experience for BF moms and anyone travelling with children."

The mom of two remains grateful, however, for all the love she's received on social media. "Thanks for all the support," she wrote in her most recent Facebook update. "Hopefully, sharing all these stories is the first step toward change!" 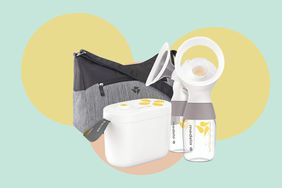