According to a new survey, one in three American families are in need of diapers—and the problem has only escalated in recent times.

It’s no secret that raising kids is expensive. But for many Americans, it goes beyond financial strain: It becomes impossible to afford all the things your child needs.

Diapers are obviously a necessity for babies and toddlers, but many families struggle to afford them, and some just can’t swing the expense at all. According to a new study from the National Diaper Bank Network and Huggies, a staggering number of American families—as many as one in three—struggles with diaper need or inadequate supply of diapers to keep their kids clean and dry. The team finds this issue affects people across a range of racial and socioeconomic backgrounds.

Not surprisingly, it’s a problem that’s only escalated in the wake of Hurricane Harvey, Hurricane Irma and Hurricane Maria.

If the survey’s findings are any indication, it's not that people and organizations are unwilling to help address this need— there are programs geared to closing up the diaper gap, and the NDBN distributed 52 million diapers in 2016 alone. But there's a lack of awareness surrounding these programs: Two-thirds of the families surveyed weren’t aware that diaper banks exist. The National Diaper Bank Network operates over 300 banks, and food banks, social security agencies, and community/faith-based groups also provide diaper assistance to families in need.

The expenses associated with putting your kids in diapers is significant: They cost $70-$80 per month, per child—and let’s not forget that actually getting diapers can be a challenge too. One in five of the families surveyed either required rides or had to borrow cars from family members or friends just to purchase diapers.

This isn’t just a class issue, it’s also a serious health issue: A lack of diapers ushers in some serious hygiene and health issues, and the implications of this shortage are long-lasting: Three of five parents grappling with diaper need are likely to miss work or school, and their children are less likely to participate in early childhood education programs thanks to lack of clean diapers.

It’s National Diaper Need Awareness Week, which means it’s more important than ever that we consider the importance of closing up the diaper gap once and for all. So donate to your local diaper bank, or throughJet.com, which is matching up to $50,000 in donations to nonprofits through the JetCares Give a Pack program all this week through October 1st. You can help other mamas get the support they need to get through those baby years. 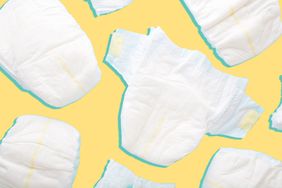