Teething might raise your baby’s temperature, but usually not enough to be considered a fever. Here’s how to tell if your child is teething or sick.

While a baby's first chompers are undeniably adorable, the teething journey can be tedious for babies and parents alike. Babies usually cut their first tooth around 4 to 6 months, and they continue teething on and off until age 2 or 3.

You can expect symptoms that range from drooling and fussiness to night wakings, face rashes, and gum irritation. Some of these symptoms are caused by inflammation as teeth cut through delicate gum tissues. But can babies get a fever from teething? Here's what parents need to know.

Does Teething Cause Fever?

According to the American Academy of Pediatrics (AAP), babies may have a "very slight" increase in body temperature when they're cutting a new tooth. It's important to note, though, that this so-called "teething fever" isn't usually high enough to be considered an actual fever, which is defined as any rectal temperature above 100.4 degrees Fahrenheit or an oral reading above 99 degrees Fahrenheit, according to the AAP.

Using data collected from 10 major studies, researchers behind a study published in the March 2016 issue of Pediatrics found that "eruption of primary teeth is associated with a rise in temperature, but it was not characterized as fever." This distinction is important because if a child develops a true fever, assuming that the cause is teething may lead doctors or parents to miss possible illness or infection that requires treatment.

Additionally, a 2022 article in the British Dental Journal also explains that there is some debate over if the "fever" that teething induces is actually the immune system reacting as the baby reaches an age where they are naturally exposed to more germs. The article reiterated the concern that because of how pervasive the concept of "teething fever" is that parents and even doctors may overlook actual illness and assume the baby is just teething.

The bottom line? Teething may cause a slight fever in your baby, but any high fever warrants a call to your doctor.

Is Your Baby Teething or Sick?

Does your child have a low-grade fever? Some causes of fever require medical attention, so it's important to examine their symptoms. Here's how to tell if a rise in temperature indicates teething or something else.

A teething fever is usually low-grade (less than 100.4 degrees Fahrenheit). It may also be accompanied by other symptoms of teething such as:

Researchers from the March 2016 study found that symptoms of teething tended to peak during the emergence of a child's primary incisors or front teeth, which can occur between 6 and 16 months of age, and decreased as the child got older.

In general, a teething fever will begin about one day before the tooth erupts, and it goes away after it cuts through the gums. There's not much you can do to prevent or break a teething fever; your child's temperature will simply go down on its own within a couple of days.

While a slightly elevated temperature can accompany a new tooth, it's not uncommon for children to get sick around the time they start teething—partly because open wounds in the gums make them more susceptible to catching bugs, says Jill Lasky, D.D.S., a pediatric dentist at Lasky Pediatric Dental Group in Los Angeles.

The following symptoms may indicate that your child has a cold, ear infection, or other illness, and it's best to visit the pediatrician:

If your little one develops a temperature lower than 100.4 degrees while they're cutting a tooth, it's probably not a cause for concern. But if it's higher than 101 degrees or accompanied by any other symptoms of illness, you should call your pediatrician.

It's always a good idea to make sure you're ruling out actual sicknesses and not just assuming your baby's symptoms are teething-related. Symptoms like runny nose, diarrhea, and sneezing aren't usually associated with baby or toddler teething, says Dr. Lasky. 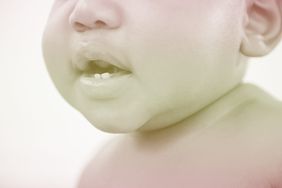 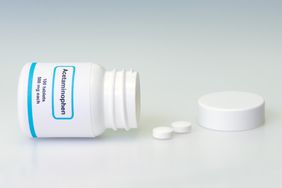 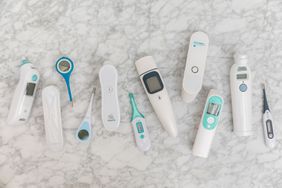