When I haven't been busy dusting off my party shoes for tonight or sneaking the last bits of holiday desserts left in the house, I've been thinking about babies. Specifically, famous ones. This year has been full of 'em: the chubby-cheeked River Blackstock, the adorable Hazel Krasinski, the dapper Otis Sudeikis—the list goes on. As much as I've enjoyed getting to know these cherubic celebutots, I'm just as excited about the crop of newbies due in 2015. Though it's tough to play favorites, here are four celeb couples whose offspring I can't wait to see.

Sure, Prince George's birth commanded the world's attention, but the royal baby No. 2 is already nabbing plenty of headlines. At first most of them were about Kate's debilitating morning sickness, but now that that's behind her, the news is much brighter. Most recently, there was the couple's successful trip to New York City and, of course, the future queen's tasteful but chic maternity wardrobe. In fact, the burgeoning bump has already made more best-dressed lists than most A-list actresses.

Thank heavens for Joey Fatone (a sentence I never thought I'd type, by the way). Earlier this month, the former 'N Sync-er accidentally/on purpose confirmed what we've long suspected: that JT was going to be a dad. Though the low-key couple has yet to confirm that their first baby is on the way, a "source" has said the 32-year-old actress is due some time in April. Meanwhile, the paparazzi has been obsessively watching her waistline, which would be my biggest nightmare.

The former Gossip Girl broke the news about her pregnancy via an artful bump pic on her website Preserve and not surprisingly has been killing it in the style department ever since. Rumors are even swirling that she's considering starting a babywear line. The actress and her hunky husband have yet to comment on that, but the couple is already receiving high marks for handling the 9-month journey like a couple of pros. Back in October, Entertainment Tonight declared that Reynolds "already looks ready to be a dad," while former co-star Ed Westwick recently said Lively is "rocking" pregnancy.

When it came time to spill the beans about her pregnancy, Carrie Underwood let her dogs do the talking. No matter -- it was enough to set the Internet buzzing with excitement. Since then, the petite country singer has shared some insight into her pregnancy, including the two hormone-induced meltdowns she had over buying a new car and not fitting into her clothes anymore. But the biggest reveal may have happeneded during the Country Music Awards, when it came out that the American Idol was expecting a boy.

Tell us: What celebrity baby are you most excited about seeing?

Are you ready to be a parent? Take our quiz and find out

Bonnie Gibbs Vengrow is a New York City-based writer and editor who traded in her Blackberry and Metro card for playdates and PB&J sandwiches—and the once-in-a-lifetime chance to watch her feisty, funny son grow up.Follow her on Twitter, Pinterest, and Google+

Image of Blake Lively and Ryan Reynolds courtesy of Shutterstock 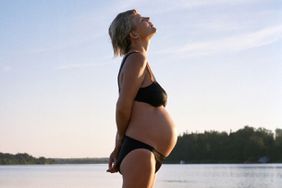