Looking for angel baby names for your little angel? Try a few of these on for size.

Most of the angel baby names, appropriately enough, end with "el." Consider these options (or their feminizations, which usually use the suffix -elle or -ella) to name your little angel.

If subtlety isn't your thing, the word "Angel" is a perfect baby name choice, for boys or girls. In pop culture, it was most famously used for Buffy the Vampire Slayer's undead true love.

For a more feminine take on Angel, go with one of these longer foreign variations. Angelica comes from Italy and Russia, while Angelique has French flair.

Cute and Pretty Girl Names for Your Baby

The archangel of nature shares this name with the Little Mermaid. Ariel means "lion of God."

A more offbeat choice, Azrael has an auspicious meaning—"helper of God"—but a less-than-auspicious set of namesakes: Azrael is the archangel of death, and was the name of the nasty cat in the Smurfs series.

The archangel of solitude bears this name, which comes with the cute nicknames Cassie or Cass.

Daniel appeared numerous times in the Old Testament and was a prophet. It's also considered the name of an angel.

Dina was listed as the angel of learning and language, and the guardian angel of the law, according to the Torah.

This angelic-inspired name means "the bearer of good news," and it's on the rise in the U.S., currently appearing just inside the top 250 baby names for girls.

One of the most popular angel names around, Gabriel was the messenger archangel who appeared numerous times in the Bible. Most memorably, he was the angel who told Mary she would give birth to the son of God. Gabriel's a top 50 favorite name for boys—though you can choose the feminizations Gabrielle or Gabriella for a girl.

Perhaps the most perennially popular angel name out there, Michael was the top name for boys for nearly 50 years, and still ranks in the top 10 names. It means "who is like God?" and has Michelle and Michaela as feminine versions.

This pretty name means "bright sea," and is associated with the angel of the month of June, making it a summery option for girls.

This stylish angel name is associated with the archangel who governed healing—along with the Renaissance artist and the Teenage Mutant Ninja Turtle. It has a very appropriate meaning: "God has healed."

This angel name is associated with a type of angel—the Seraphim were the highest ranking angels in Christian angelic hierarchy. Seraphina means "fiery," and while it's a well-known name picked by celebs like Ben Affleck and Jennifer Garner, it still has yet to crack the top 1000 baby names in the U.S.

This archangel is considered the angel of surrender, and is a variation on the popular Zachary, which means "the Lord has remembered." 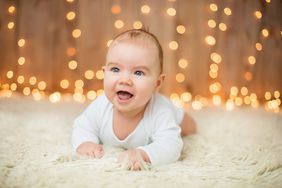